Temple of Hathor, Island of Bigga 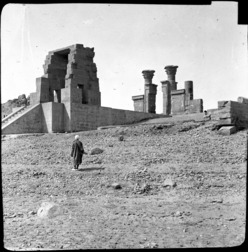 Ptolemy III, Euergetes I (246-221 BCE) built the small Temple of Hathor on the island of Bigga (ancient name Senemt), one of many small islands in the Aswan area. Bigga lies to the west of Philae and was originally visible from the Kiosk of Nectanebo on Philae [kiosk now relocated to Agilqiyya]. Bigga was also the site of the Abaton, or Tomb of Osiris. The temple of Hathor was later turned into a church in the Coptic period.