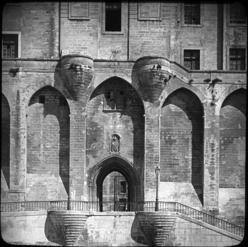 The massive Palais des Papes, the powerful walls and eight high towers of which still dominate the city, is both an outstanding achievement of Late Gothic architecture and a highly visible emblem of the most glorious period of Avignon’s history. Its sprawling and dissonant appearance expresses the turbulent period in which it was erected and the diverse characters of the men responsible for its construction. It is, in fact, two distinct palaces: the Palais Vieux built by Benedict XII and the Palais Neuf undertaken by Clement VI. Both palaces were renovated by later popes and by the papal legates who continued to use the building after the Papacy’s return to Rome in 1378.