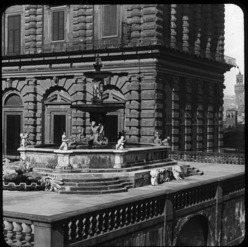 On the terrace above the grotto, level with the piano nobile windows, Ammanati constructed a fountain centered on the axis; it was later replaced by the Fontana del Carciofo (“Fountain of the Artichoke”), designed by Giambologna’s former assistant, Francesco Susini, and completed in 1641.

In addition to the various elaborate fountains that Cosimo ordered, Ammanati was also commissioned to improve (1560-1577) the Palazzo Pitti, which had been acquired (1549) as a residence for the Duchess, Eleonora of Toledo. His masterpiece there is the half-sunken courtyard, with the surrounding building rising a full three storeys on three sides of a rectangle, and, above a fountain grotto on the fourth side, framing a view over the Boboli Gardens, which were being laid out axially up the steep hill that rises towards the Belvedere fortress. It is architecture of a peculiarly sculptural variety, well adapted to make a visual transition between palace and garden on account of its heavily rusticated masonry, which was used in a capricious and deliberately anti-classical way. This recalls the fortress-like building for the Mint (Zecca) in Venice by Sansovino and designs published by Serlio in 1537. The foundations were laid in 1560, and Ammanati was designated sole architect in the following year, succeeding Vasari, who thenceforth had to concentrate on the Uffizi.