Milvian Bridge: View from base of bastion tower showing the six spans 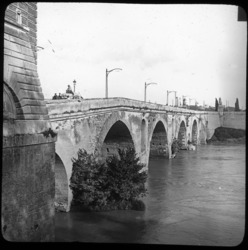 Bridge over the Tiber in northern Rome. It was an economically and strategically important bridge in the era of the Roman Empire and was the site of the famous Battle of Milvian Bridge (between the Roman Emperors Constantine I and Maxentius in 312). A bridge stood on the site in 206 BCE. In 115 BCE, consul Marcus Aemilius Scaurus built a new bridge made of stone in the same position, demolishing the old one. Soon after the election in 1800 of Pius VII, Valadier was put in charge of works on the River Tiber, including the restoration of the Ponte Milvio, a symbolic monument for the papacy as it was the scene of Constantine’s great victory. The decayed bastion was turned into a monumental gateway with severe rustication, reminiscent of Claude-Nicolas Ledoux’s Barrières.