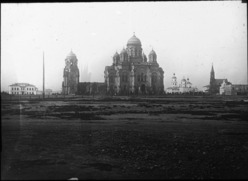 Church construction and economy in general rebounded in the reign of Alexander III (1881-1894). In thirteen and a half years, the properties of the Russian Orthodox church increased by more than 5,000 places of worship; in 1891 the list expanded with Siberian towns along the emerging Trans-Siberian Railway. Large Neo-Byzantine (the officially endorsed style) cathedrals erected in Russia followed either the single-dome or the five-dome plan. Restoration of historical churches so far has a mixed record of success. There is at least one example of a Byzantine design (The church of Kazan Icon in Irkutsk) “restored” to imitate Russian Revival by adding tented roofs.