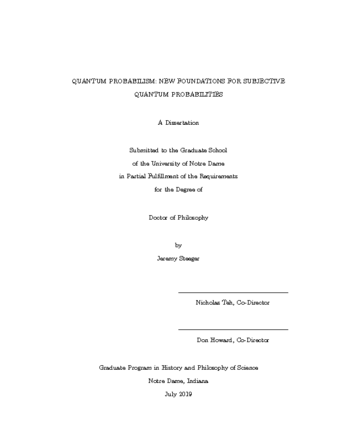 At the intersection of the foundations of statistics and the foundations of quantum theory, one comes across a hotly-debated question: what are the probabilities in quantum theories? Do they all reflect the subjective opinions of various agents, or do some of them reflect objective features of the world? One answer—Lewisian dualism, a view that takes some quantum probabilities to be subjective and others to be objective—has gained near-consensus among philosophers of science. However, our most sophisticated defense of this view (due to Deutsch, Wallace, Saunders, Myrvold, Greaves, and others) has two significant problems. First, it requires a very particular approach to the measurement problem (namely, the Everett interpretation). Second, it relies on the pragmatic goals of scientists (e.g., their aim to avoid losses in bets) rather than their epistemic goals (e.g., their aim to accurately describe the world). I give a new defense of dualism that rectifies both of these problems. I generalize the Deutsch-Wallace argument to defend the objective probabilities in a host of realist approaches to measurement, and I modify the accuracy-dominance argument for probabilism to defend the subjective probabilities in these approaches. I also critically examine several previous attempts to interpret all quantum probabilities subjectively.