Karnak, Precinct of Amun-Re: Man standing next to Amenhotep III's plinth of red granite with sacred scarab on top 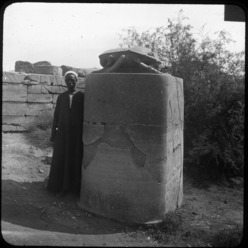 This has now been relocated to the sacred lake’s western side.

The largest precinct of Karnak is that of Amun, which is surrounded by a rectangular enclosure wall, orientated to the four points of the compass. This wall, built by Nectanebo I (reigned 380-362 BCE), was 2.5 km in length, with four monumental and four secondary gates. Inside it there are the levelled remains of previous ramparts, which show that the sacred precincts had been extended. The Temple of Amun was built on a mound that symbolized the first land to emerge from the primordial swamp. The Amun complex incorporated a Sacred lake, which was supposed to represent the swamp in which the sun-god Re first manifested himself. The extensions along the north-south axis comprise a succession of four pylons (VII-X) and triumphal gates, which separate four courts, including the ‘Cachette Court’. The jubilee temple of Amenophis II (reigned ca. 1426-ca. 1400 BCE) straddled the east wall of the fourth court (between pylons IX and X).