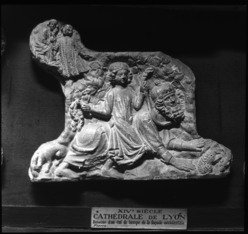 The cathedral is famous for the 325 reliefs decorating the embrasures of the west portals, which date from the episcopate (1308–22) of Pierre de Savoie. The reliefs representing frolicking lovers from the Lai d'Aristote are remarkable for their subtle modelling and the composition of the figures in relation to the frame.

The cathedral was rebuilt from 1170 to 1180 by Bishop Guichard. The conservatism of the canons is apparent in such archaisms as a bench for the clergy round the inside of the apse; in the very traditional plan (a seven-sided polygonal apse leading out of a straight-ended choir, with squared-off side chapels); and in the style, which is still Romanesque, with blind arcading, fluted pilasters in the triforium, and triple windows in the straight bays. The Gothic style first appears in the transept (with pointed arches in the triforium). The chapel of the Bourbons, built in the second half of the 15th century on the south side of the nave, is the most beautiful example of Flamboyant in the Lyonnais.