Athens Acropolis: Erechtheion: View of the "Porch of the Maidens", west end of the south side 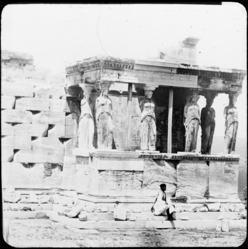