Theoretical Deliberation as Intentional Belief Formation: An Essay on the Voluntarist Grounds of Epistemic Responsibility 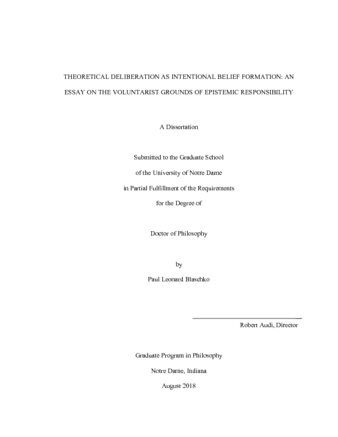 In this dissertation, I give an account of the indirect voluntary control we have with respect to some processes of belief formation, and show how this control can plausibly serve as the ground of some epistemic responsibility. My overarching argument proceeds in three steps. First, I argue that if we are responsible for any of our beliefs, then we must have some voluntary, non-manipulated control over our beliefs. This is a familiar sort of control; it’s the sort we enjoy with respect to our intentional actions. Secondly, however, I argue that locating such control in the doxastic case is far from straightforward: we do not have direct voluntary control over our belief formation, and the kinds of indirect voluntary control we most obviously have is unsuited to the task of grounding epistemic responsibility. After narrowing in on more precise and plausible versions of doxastic voluntarism, then, I argue for one that would allow for the necessary kind of control: the process of belief formation, in at least some cases, is a non-basic intentional action, and we thus have indirect (non-basic), but intentional, voluntary control over these processes. In giving an account of these processes, then, we explain the possibility of epistemic responsibility by accounting for its grounds, and greatly clarify a number of issues regarding the role of the will in cognition and its evaluation.