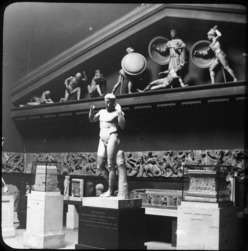 The Bassai (Bassae) frieze original is in the British Museum (room 16).

The Glyptothek was commissioned by the Crown Prince (later King) Ludwig I of Bavaria alongside other projects, such as the neighboring Königsplatz and the building which houses the State Collection of Greek and Roman Antiquities, as a monument to ancient Greece. He envisioned a “German Athens”, in which the ancient Greek culture would be remembered; he had this built in front of the gates of Munich. The layout of the Königsplatz complex was designed by the architects Karl von Fischer and Leo von Klenze in 1815, the latter arranged it in the style of a forum, with the Glyptothek on the north side. Colorful frescoes and stuccos made by distinguished artists such as Peter von Cornelius, Clemens von Zimmermann, and Wilhelm von Kaulbach adorned the walls of the museum. The frescoes were destroyed in WWII, but the artwork was not damaged. The interior was rebuilt using brick and stucco.