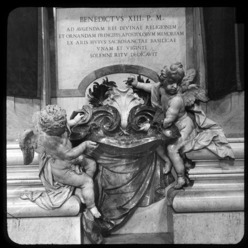 One of two colossal basins, completed 1725 by Agostino Cornacchini; this one is on the south side of the nave.

Bramante was hired by Julius II to begin a radical reconstruction, to replace Old Saint Peter’s, and intensive planning by Bramante, Giuliano da Sangallo and Fra Giovanni Giocondo preceded the laying of the foundation stone on 18 April 1506. Since Bramante’s first designs of 1506, half a dozen architects had worked under five successive popes, all bringing their own revisions with them. In the 18 remaining years of his life Michelangelo succeeded in ‘uniting into a whole the great body of that machine’ (Vasari), ensuring that the crossing and dome would follow his overall design, even though the façade and nave remained unresolved. His new design, as presented in the engravings (1569) by Etienne Dupérac, took the form of a centralized building over a Greek cross. The façade was built between 1607 and 1625, and the nave was finally consecrated in 1626; the confessio was built to Maderno’s design in 1615-1616.