The Algebraic Structure of Propositions 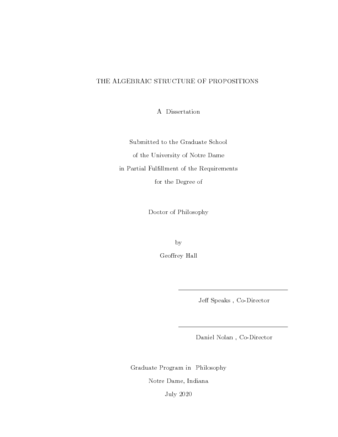 This dissertation is about various puzzles that arise when we attempt to construct general theories of propositions, properties and relations. The goal of the dissertation is to make some progress on these puzzles by employing a broadly abductive approach to them. On my view, one feature of an abductive approach is working out the overall algebraic structure of the objects in question. On grounds of simplicity and elegance, theories admitting of more straightforward algebraic description are favored, at least initially. Theories not admitting of such a description must make up for this lack of elegance. This provides us with some guidance when our evidence and intuition falls short.

Chapter 2 concerns the relationship between indefinite extensibility and theories of propositional explanation. In particular, I will argue that we cannot overcome problems with the principle of sufficient reason by adopting a view on which contingent truth is indefinitely extensible. Given our best theories of indefinite extensibility, even if contingent truth turns out to be indefinitely extensible, the principle of sufficient reason still entails that all truths are necessary, given plausible background principles.

Chapter 4 puts forward a theory of the representational properties of propositions that goes some way towards answering worries relating to the unity of the proposition. Contra many recent accounts in this vicinity, I will argue that the best theory here is a primivitist one. The theory makes use a novel operation I call application. I will argue that with this primitive, a very general theory of the representational properties of various sorts of abstract objects can be developed.