Roman ruins at Timgad: Overall view of the forum with the Arch of Trajan in the background 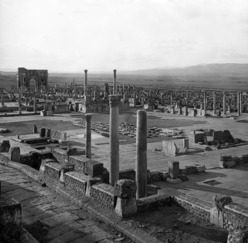