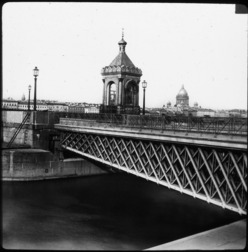 The first permanent bridge built across the Neva River in Saint Petersburg, Russia. It connects Vasilievsky Island and the central part of the city (Admiralteysky Island). The original name of the bridge was Nevsky Bridge. It was later renamed Blagoveshchensky Bridge. After the death of Tsar Nicholas I, it was named Nikolaevsky Bridge (1855 to 1918) in his honor, and in 1918 it received the name Lieutenant Schmidt Bridge. It was designed by Stanislaw Kierbedz, a Polish engineer working in Russia. The architect Alexander Brullov participated in the decoration. The design was a cast iron bridge with a bascule section. At the time, it was the longest bridge in Europe. A new bridge was constructed on the site in 2006.