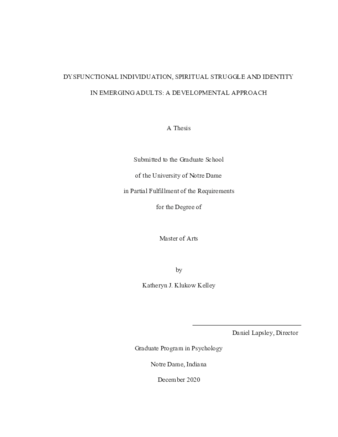 Emerging adults show declining participation in organized religion and increasing spirituality, a finding that has occupied researchers for decades. This paper suggests that the source of this puzzling trend is the religious identity development emerging adults pursue. In order to consolidate an adult identity, emerging adults need to complete the work of individuation. This requires the emerging adult to renegotiate relationships with parents in pursuit of a balance between autonomy and connectedness, and in the process to evaluate his or her religious heritage and decide on ultimate values.

These developmental tasks can result in spiritual growth even while religious participation declines, as the emerging adult shifts from a religious identity assigned in childhood by parental socialization to one chosen as an individuated adult. One indication that this process is taking place is the ubiquity of religious and spiritual struggles in emerging adults. Although they can be distressing, the experience of religious and spiritual struggle may result in growth as the emerging adult seeks meaningful spiritual experiences and forms a personal belief system, tools that allow them to consolidate a religious identity and develop spirituality.