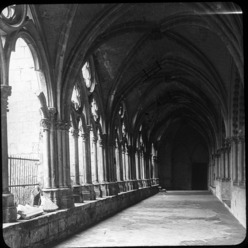 A former Roman Catholic cathedral. It was formerly the seat of the Bishopric of Noyon, abolished by the Concordat of 1801 and merged into the Diocese of Beauvais. The cathedral was constructed on the site of a church burned down in 1131 and is a fine example of the transition from Romanesque to Gothic architecture. In plan it is a Latin cross; the height of the nave vaulting is 23 m. The west front has a porch, added in the 14th century, and two unfinished towers, their upper portions dating from the 13th century. From the northwest corner of the nave runs the western gallery of a fine cloister erected in 1230; and next to the cloister is the chapter house of the same date, with its entrance adorned with statues of the bishops and other sculpture.