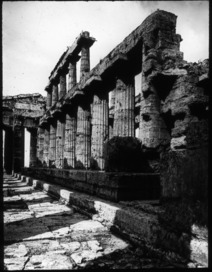 The second Temple of Hera probably dates from ca. 460 BCE. It is Doric order, and there are two rows of internal columns, a mainland Greek feature that became more widespread in Sicily and South Italy at this time.

Ancient city of Paestum was established by Greek colonists from Sybaris, who called it Poseidonia; taken by Lucanians 5th century BCE and by Romans 273 BCE; was famous for its roses; was destroyed by Saracens 871 CE; now site of the village of Pesto. There are three major Greek temples, among them, on the highest point of the town (some way from the other temples), in the Sanctuary of Athena, is the temple of Athena. It was built in about 500 BCE. The Sanctuary of Hera contains two temples, popularly misnamed the “Basilica” and the “Temple of Neptune”. The second Temple of Hera probably dates from ca. 460 BCE.