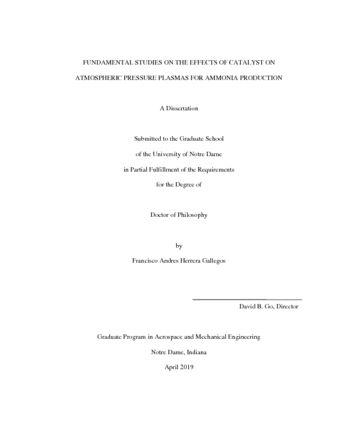 Plasma-catalysis is a field with great potential in many applications. These include carbon dioxide (CO2) conversion, hydrocarbon reforming, synthesis of nanomaterials, abatement of toxic waste gases, and ammonia (NH3) production. It has several advantages: operating close to atmospheric conditions (e.g. pilot plants) unlike thermal catalysis, and not requiring a constant power supply to operate, meaning renewable energies are good candidates to power these applications. This work focuses on one of its applications, NH3 production. Ammonia is essential for life because it is a required precursor to fertilizers, explosives, and other products. Its production represents 1-2% of energy consumption around the world. In order to improve plasma-catalysis, it is necessary to have a better understanding of the fundamental mechanisms behind catalytically-enhanced plasma ammonia synthesis, in particular, the mutual interaction between the plasma and catalyst. The literature has extensively reported plasma-catalysis manifests in an improvement of the performance of reaction kinetics when plasma and catalyst work together. These interactions between plasma and catalyst can be interpreted from two perspectives: the effects of plasma on the catalyst and the effects of catalyst on the plasma. This work focuses on the latter, with the goal of understanding the fundamental mechanism of the plasma/catalytic synergy in NH3 synthesis. Using a packed-bed dielectric barrier discharge, the macroscopic dielectric barrier discharge (DBD) properties were obtained using different techniques such as optical emission spectroscopy (OES), current-voltage (I-V) measurements, and charge-voltage (Q-V) measurements. It was found that there are no important statistical differences (through ANOVA analysis) between all analyzed metal-on-oxide support configurations (regardless of metal) for the filamentary characteristics (e.g. number of filaments) and nitrogen temperatures (e.g. vibrational temperature) of various excited species. These results show that the plasma is not appreciably altered by the metal catalyst even though the ammonia rate for each set of experimental conditions changed with the catalyst. Ultimately, this work shows any synergy that occurs during ammonia synthesis in this plasma-catalyst system is not due to catalyst modification of the plasma at a macroscopic level.