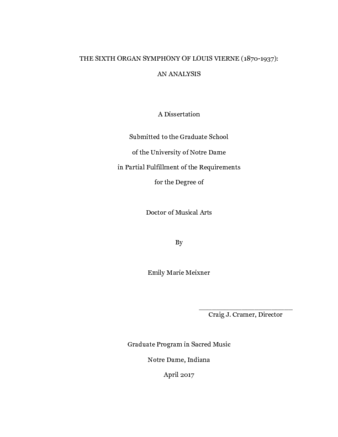 Louis Vierne, organist at the Cathedral of Notre Dame in Paris from 1900 until his death, composed six organ symphonies over the course of his career, and it is primarily for these works that he is remembered. The Sixième Symphonie pour Orgue, Op. 59 was composed during the summer of 1930, at which time Vierne also began sketches of a seventh symphony. However, these sketches were never completed, leaving the Sixth Symphony as Vierne’s last contribution to the genre. This project attempts to analyze the Sixth Symphony, proposing the work as the culmination of Vierne’s compositional style as represented in his organ symphonies. Detailed analysis of the work will reveal this style to consist of a synthesis of aspects of impressionism, dodecaphony, traditional elements such as sonata form, and nineteenth century methods such as cyclic treatment and thematic transformation. In a virtuosic masterpiece influenced by both classicism and romanticism, Vierne’s inclusion of aspects of dodecaphony and impressionism marks the entrance of the genre of the organ symphony into the twentieth century.