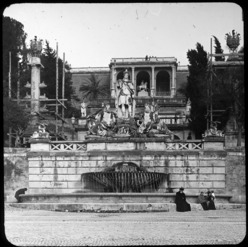 The Fontana della Dea Roma is a monumental fountain located in the Piazza del Popolo in Rome. It was constructed in 1822-1823 at the terminus of a newly-built aqueduct, the Acqua Vergine Nuovo. The fountain sculptures in the Piazza del Popolo were the work of Giovanni Ceccarini, with matching compositions of a central figure flanked by two attendant figures. These stand on each side of the Piazza to the east and west, flanked by neoclassical statues of The Seasons (1828). The Fontana di Nettuno (“Fountain of Neptune”) stands on the west side, Neptune with his trident is accompanied by two dolphins and mermen. “Rome between the Tiber and the Aniene” on the east side, against the steep slope of the Pincio, represents the terminal mostra of the aqueduct. The personification Dea Roma armed with lance and helmet, stands behind the she-wolf feeding Romulus and Remus. The fountains were part of the project to ennoble the Piazza del Popolo, Valadier’s triumphant experiment in urban design.