Building Cities, Turning Souls: Necessity in the “City in Speech” of Plato’s Republic 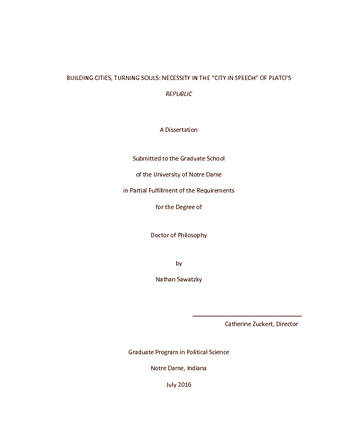 In this dissertation, I argue that paying close attention to whom Plato portrays speaking in the dialogue allows us to distinguish, as Socrates and his interlocutors construct the famous “city in speech,” the elements of the city Socrates endorses from those, all demanded by Glaucon and Adeimantus, that Socrates does not endorse. The city is not, as has been thought, a unified or coherent city, in Plato’s view. By distinguishing the elements of a true, healthy city discovered by a philosopher from those demanded by ambitious, courageous young men, I argue that Socrates’s vision of just city requires institutions that respect, coordinate, and otherwise respond helpfully to individuals’ needs and aptitudes, including those of women, and that Plato’s Republic is primarily a response to the problem of courageous manliness in politics and private life.