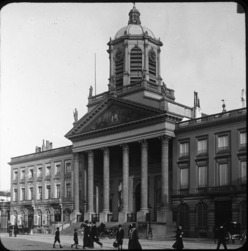 The building lost somewhat of its typical neoclassical temple-like appearance by the addition in the 19th-century of a bell tower (after the design of Tilman-François Suys) and a colored fresco by Jean Portaels on the pediment.

The building was designed and built to be included in the neoclassical style of the Place Royale. Construction of the facade was started by architect Gilles-Barnabé Guimard after the designs of Jean-Benoît-Vincent Barré (1775). The nave, transept, choir and and sacristy were build under supervision of Louis Montoyer in the years 1785-1786. It is an abbey church and has a deep extended choir with place for choir stalls for the monks. During the French revolution it was transformed into a Temple of Reason, and later a Temple of Law. In 1802, the church was returned to the Catholic religion. On 21 July 1831 H.M. Leopold I, the first Belgian king, took the constitutional oath on a decorated stage in front of the church. The bell tower is a 19th century addition not in keeping with the original neoclassic design.