Fountain of the Archbishop: Distant context view of the park, from the front, looking towards Notre Dame 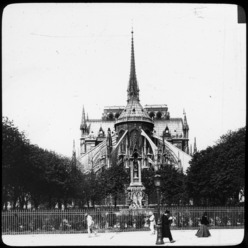 The square is a tiny park adjoining Notre Dame de Paris on the east side named after Pope John XXIII. The central sculpture within the neo-Gothic spire is the Virgin and Child, sculpted by Merlieux. The lower part of the fountain shows three archangels defeating the allegorical figure of heresy. The fountain is known as the Archbishop’s Fountain as the area, since the 17th century, had been the site of the Archbishop’s Palace and garden.