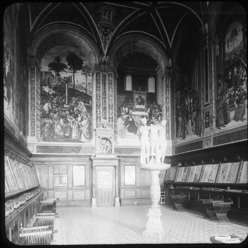 Adjoining the cathedral is the Piccolomini library, housing precious illuminated choir books and frescoes painted by the Umbrian Bernardino di Betto, called Pinturicchio, probably based on designs (or influenced) by Raphael. The frescoes tell the story of the life of Siena’s favourite son, cardinal Enea Silvio Piccolomini (Aeneas Silvius Piccolomini), who eventually became Pope Pius II. He was the uncle of cardinal Francesco Todeschini Piccolomini (then archbishop of Siena and the future pope Pius III), who commissioned this library in 1492 as a repository of the books and the manuscript collection of his uncle. The ceiling is covered with painted panels of mythological subjects. They were executed between 1502 and 1503 by Pinturicchio and his assistants. The entrance is a finely carved marble monument with two openings with round arches, executed in 1497 by Lorenzo di Mariano. In the middle of the library is the famous statue Three Graces, a Roman copy of a Greek original.