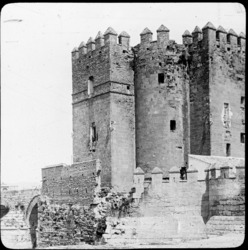 The tower was built during the late 12th century by the Almohads to protect the nearby Roman Bridge (Puente Romano) on the Guadalquivir river. The tower, standing on the left bank of the river, originally consisted of an arched gate between two square towers. The building was restored in 1369 by king Henry II of Castile. A third tower was added to the existing ones, in the shape of two cylinders connecting them. The tower was declared a national historical monument in 1931.