The Virtues of Scientific Practice: MacIntyre, Virtue Ethics, and the Historiography of Science 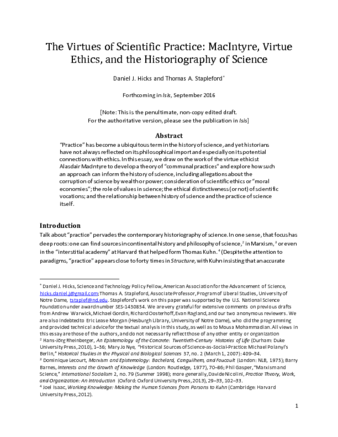 “Practice” has become a ubiquitous term in the history of science, and yet historians have not always reflected on its philosophical import and especially on its potential connections with ethics. In this essay, we draw on the work of the virtue ethicist Alasdair MacIntyre to develop a theory of “communal practices” and explore how such an approach can inform the history of science, including allegations about the corruption of science by wealth or power; consideration of scientific ethics or “moral economies”; the role of values in science; the ethical distinctiveness (or not) of scientific vocations; and the relationship between history of science and the practice of science itself.