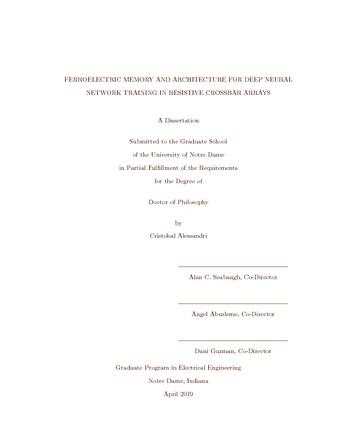 Deep neural networks (DNN) can perform cognitive tasks such as speech recognition and object detection with high accuracy, but are limited by their large computational cost. For this reason, it has been proposed to use resistive crossbar arrays to minimize data movement and perform matrix-vector multiplications in the analog domain. One of the main challenges of these architectures is the limited resolution and nonlinearity of resistive memories available today. In this thesis, this limitation is addressed in two ways:

First, ferroelectrics are studied for multilevel memory devices in resistive crossbar arrays. In their polycrystalline form, these materials are composed of a multitude of grains with independent polarization states, allowing for dense, nonvolatile, multilevel memories compatible with standard semiconductor fabrication processes. However, modeling the dynamics of polycrystalline ferroelectrics is challenging due to the statistical variations in the composition of its grains. For this purpose, a model to extract the statistical properties of a ferroelectric film and a Monte Carlo simulation that can describe and predict its polarization dynamics and variability were developed. This model provides the tools to characterize and optimize ferroelectric materials, and to design and evaluate devices, circuits and architectures for deep learning and other applications.