Roman ruins at Timgad: View of one of the bath complexes (thermae); showing the caldarium 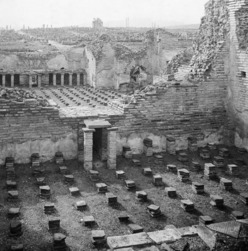 In the town no fewer than 14 bath complexes were built. The caldarium had furnaces or a hypocaust under the floor (which rested on the stone pillars shown).