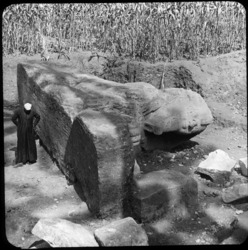 Egyptian site ca. 20 km south of Cairo on the west bank of the Nile. Memphis was founded at the beginning of the 1st Dynasty (ca. 2925 BCE), traditionally by King Menes or possibly by King Narmer, and served as the national capital during the Early Dynastic Period and the Old Kingdom (ca. 2925-ca. 2150 BCE). Thereafter it retained its political, economic, strategic, religious and artistic pre-eminence over three millennia, into the Roman period (30 BCE-395 CE). The major excavations of the British Egyptologist Sir William Matthew Flinders Petrie, conducted from 1907 to 1912, uncovered the majority of the ruins as seen today, including the pillared hall of the Geat Temple of Ptah, and a calcite alabaster sphinx of the 18th Dynasty (in situ outside the Great Temple of Ptah, also 18th Dynasty.)