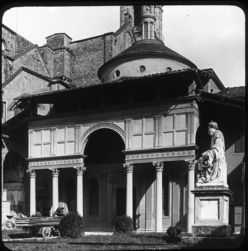 The Pazzi Chapel was intended to emulate the Old Sacristy at S Lorenzo. (It has recently been suggested by Tractenberg that the Pazzi Chapel is not by Brunelleschi but by Michelozzo di Bartolomeo, a theory that has not yet received universal acceptance.) The design may date from 1423. Owing to the patron’s reluctance to make funds available, the Pazzi Chapel was not built until 1442-ca. 1465, after the death of Pazzi (who was buried in Santa Croce) and mostly after the death of Brunelleschi himself; after ca. 1450 the work was probably supervised by the workshop of Bernardo Rossellino. Despite theories to the contrary, it is likely that the whole building as executed is substantially that projected by Brunelleschi, including the portico.