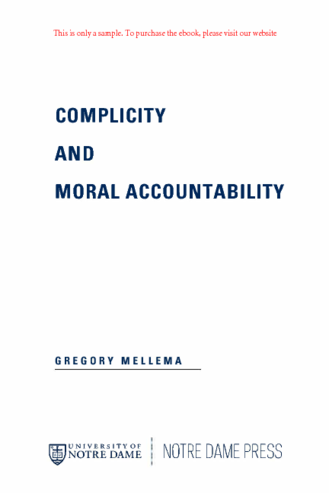 In Complicity and Moral Accountability, Gregory Mellema presents a philosophical approach to the moral issues involved in complicity. Starting with a taxonomy of Thomas Aquinas, according to whom there are nine ways for one to become complicit in the wrongdoing of another, Mellema analyzes each kind of complicity and examines the moral status of someone complicit in each of these ways. Mellema’s central argument is that one must perform a contributing action to qualify as an accomplice, and that it is always morally blameworthy to perform such an action. Additionally, he argues that an accomplice frequently bears moral responsibility for the outcome of the other’s wrongdoing, but he distinguishes this case from cases in which the accomplice is tainted by the wrongdoing of the principal actor. He further distinguishes between enabling, facilitating, and condoning harm, and introduces the concept of indirect complicity. Mellema tackles issues that are clearly important to any case of collective and shared responsibility, yet rarely discussed in depth, always presenting his arguments clearly, concisely, and engagingly. His account of the nonmoral as well as moral qualities of complicity in wrongdoing-especially of the many and varied ways in which principles and accomplices can interact-is highly illuminating. Liberally sprinkled with helpful and nuanced examples, Complicity and Moral Accountability vividly illustrates the many ways in which one may be complicit in wrongdoing.