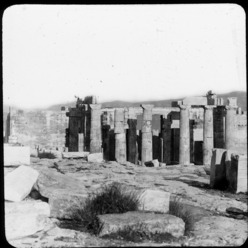 This was the second building on the Acropolis constructed as part of the Periclean programme. According to building accounts and Plutarch’s Pericles (XIII.7), the Propylaia or great gateway (propylon) was begun in 437 BC, and work apparently stopped in 432 BC. The architect was Mnesikles. As constructed, the building consists of a large central hall flanked by wings to the south-west and north-west. Even as built, the Propylaia was never entirely finished: lifting bosses were left on wall blocks and matrices of unworked marble protected the stylobates and steps.