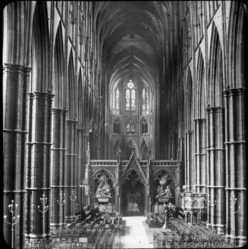 This is the highest Gothic nave in England at 101 feet (31 meters).

Rebuilt by King Edward the Confessor probably in the late 1040s, when he apparently also began the palace. The former Benedictine, now collegiate, church contains an immense quantity of monumental sculpture from the Middle Ages onwards, as well as important medieval paintings. The anonymous life of St Edward the Confessor, written 1065-1067, gives a long description of the parts of the abbey that existed when Edward died in January 1066. The Abbey became the coronation site of Norman kings, but none were buried there until Henry III, intensely devoted to the cult of the Confessor, rebuilt the Abbey in Anglo-French Gothic style as a shrine to honour Saint Edward the Confessor and as a suitably regal setting for Henry’s own tomb, under the highest Gothic nave in England. The work continued between 1245 and 1517 and was largely finished by the architect Henry Yeveley in the reign of Richard II. Yeveley was appointed master mason to Westminster Abbey in 1387, although he may have been involved with earlier projects there. Henry VII’s Chapel was added in 1503.