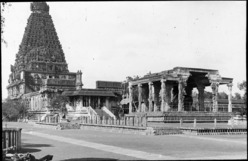 Thanjavur was capital of the Chola dynasty from the mid-9th century AD to the mid-12th, in Tamil Nadu, India. The temple to Shiva as Great Lord (Brihadishvara) is a royal foundation of Rajaraja I (reigned 985-1014), after whom it is best known as Rajarajeshvara. It was consecrated in 1010. Size is its most striking feature, and in its time it must have been the largest temple in India. In addition to the tower (vimana) of the main temple, there are numerous shrines and sculptures, courtyards and two halls with pillared porches (mukhamaṇḍapa). The two dominant themes are Tripurantaka and Shiva as Nataraja.