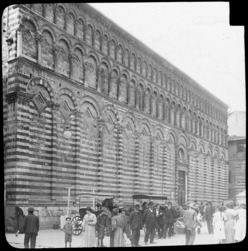 The adjective fuoricivitas (a mix of Italian and Latin meaning “outside the city”) refers to the fact that, when it was founded during the Lombard rule in Italy, was located outside the city walls. Its appearance is mostly defined by its northern side, originally parallel to now disappeared walls. The southern side faces the cloister, while the apse side and the façade are barely visible due to the nearby edifices. The northern side has most of the external decorations, including a rich portal with a sculpted architrave, signed and dated (1166) by the master Gruamonte and depicting the “Last Supper”. The pattern of the wall is typical of other buildings in Pistoia, and inspired to the contemporary Pisan Romanesque: it features rows of small arcades on small or blind columns with small windows and lozenges inscribed within the arches.