A study of 36Cl production in the early Solar System 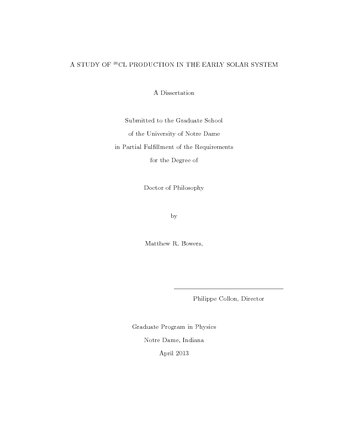 Short-lived radionuclides (SLRs) with lifetimes t < 100 Ma are known to have been extant when the Solar System formed 4.568 billion years ago from meteoritic studies of their decay products. Identifying the origins of SLRs can provide insight into the origins and timescales of our Solar System and the processes that shaped it. There are two proposed production scenarios for the origins of SLRs with t < 5Ma. Freshly synthesized material could be incorporated into the Solar System by a nearby stellar source (e.g., supernova, AGB star, Wolf-Rayet star), or SLRs could have also been produced by the bombardment of gas and dust by solar energetic particles (SEP) emitted by our young Sun. The origin of extinct 36Cl (t1/2 = 0.301 Ma) in the early Solar System is thought to have been produced by local particle irradiation. However the models that attempt to recreate the production of 36Cl in the early Solar System lack experimental data for the nuclear reactions considered. The first measurement of the 33S(a,p)36Cl reaction, an important reaction in the production of 36Cl, was performed. The cross section measurement was performed by bombarding a target and collecting the recoiled 36Cl atoms produced in the reaction, chemically processing the samples, and measuring the 36Cl/Cl concentration of the samples with accelerator mass spectrometry (AMS). The cross section was measured at six energies that ranged from 0.70 up to 2.42 MeV/A, within the SEP energy spectrum. The experimental results were found to be systematically higher than the predicted cross sections. However, the deviations lead to < 7% increase in total production of 36Cl under the x-wind model. From the experimental measurement and a study of the other reactions’ contributions to 36Cl production, 36Cl could have been produced close to the protoSun by reactions on CA target using the x-wind model, or in a late-stage irradiation event on a volatile-rich reservoir by 3He and alpha reactions on S targets.