New Town Hall, Munich: Raking view of the lower half of facade from Marienplatz 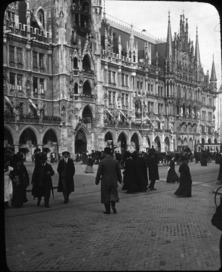 The new Rathaus was built in a Gothic Revival style by George Joseph von Hauberisser after he had won the competition in 1866. Extensions were added to it in 1888-1893 and 1899-1908, and it was the first major Gothic Revival public building in Munich. The first stage of the Rathaus showed his predilection for Flemish and French Gothic. Located in the northern part of the Marienplatz, the main facade is placed toward the plaza, while the back side is adjacent to a small park (Marienhof). The basement is almost completely occupied by a large restaurant called Ratskeller.