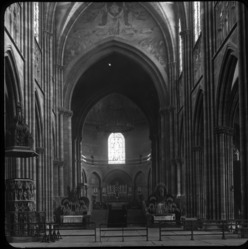 Filename misspelled; I think the image is a dupe of 2607

The construction of the cathedral lasted more than three centuries and reflected not only successive styles but also influences coming alternately from east and west of the city. The architectural diversity is matched by that of the sculpture, each including some of the most original works of the Middle Ages. The stained glass constitutes the most extensive medieval ensemble in France after Chartres Cathedral. From 1459 the architect of Strasbourg assumed the rank of supreme judge of all the stonecutters in the Empire; and from the end of the 18th century the cathedral played a prominent role in the rediscovery of Gothic, marked in 1772 by Johann Wolfgang von Goethe’s essay Von deutscher Baukunst, which he devoted to the cathedral.