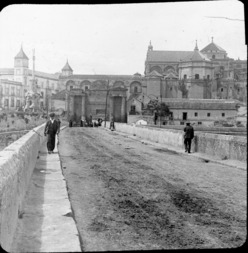 Surrounding the large Old town are the Roman walls: gates include the Puerta de Almodóvar, the Puerta de Sevilla and Puerta del Puente, which are the only three gates remaining from the original thirteen. The Puerta del Puente is located on the site of previous Roman and Moorish gates, which united the city to the Roman Bridge (Puente Romano). The construction of a new, larger and more modern gate was commissioned of Ruiz by the city’s governor Alonso González de Arteaga on 18 February 1572. It has a central square passage, flanked by two pairs of Doric columns, surmounted by a Classical entablature.