A History of Georgian Scientific Intelligentsia: The Case of the Nikoladze Family 1860-1981 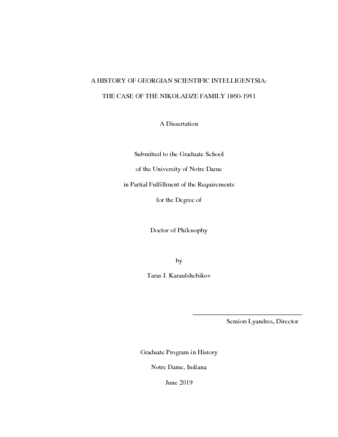 The dissertation offers an intellectual and cultural portrait of the Nikoladze family—with a primary focus on Nikolai (Niko) Nikoladze (1843-1928) and his elder daughter Rusudana Nikoladze-Polievktova (1884-1981)—who belonged to the Georgian intelligentsia, a group of highly educated and critical thinking intellectuals who had a commitment to modernize their homeland according to the principles of scientific rationalism. This family of professionals played a visible role in the industrial and cultural transformation of Georgia during a long period encompassing late Imperial Russia, Georgia’s independence in 1918-1921, and the Soviet era. Methodologically, the dissertation focuses on a representative family of intellectuals and explores in detail what it meant for them to be the intelligentsia. It argues that the history of the family helps us understand the long-term continuities in the history of the intelligentsia’s cultural traditions from the prerevolutionary to the late Soviet periods by showing how these traditions were preserved, expressed, and transmitted. It examines the intellectual development of Niko Nikoladze and other young Georgian students under the influence of Nikolai Chernyshevskii, the most vivid representative of Russian nihilist counterculture of the 1860s. It explores the everyday family life and examines the family’s interactions with a wider intelligentsia community both in Russia and Europe. It investigates how the philosophical values that the family identified with affected their professional choices, political alliances, romantic life, and cultural tastes. By analyzing family’s methods of child education, it reconstructs the intergenerational transmission of the intelligentsia’s collective memory from the late nineteenth century to the Soviet period. It argues that under the Soviet regime, the memory of prerevolutionary lifestyle became the major self-identification criterion for the Nikoladze and many other old intelligentsia families, contributing to the development of a distinct identity that combined loyalty to the regime with emotional and intellectual attachment to the prerevolutionary traditions.