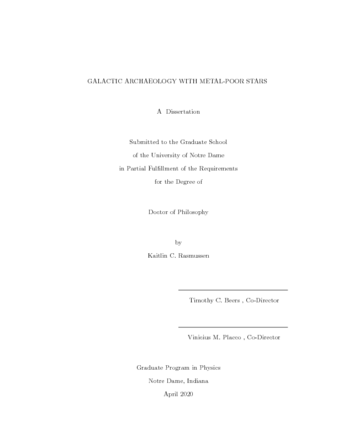 Metal-poor stars are time capsules into the earliest epochs of the Universe. Their stellar populations, chemical abundances, and proper motions allow for insight into the nucleosynthesis paths and proto-Galactic systems which became the building blocks of the Milky Way. Through a wide variety of methods, the aim of this thesis is to advance the understanding of the chemodynamical evolution of the Galaxy.

In “Metal-poor Stars from the South African Large Telescope”, the first release of a large-scale study of relatively bright (V < 13.5) metal-poor stars is presented. The elemental abundances of C, Sr, Ba, and Eu are reported, as well as several alpha-elements (Mg, Ca, Sc, Ti, V) and iron-peak elements (Mn, Co, Ni, Zn). We find a diverse array of abundance patterns, including several consistent with the signatures of carbon-enhanced metal-poor CEMP-i and CEMP-r stars. We find that 15 of 50 (30%) are carbon-enhanced (with [C/Fe] > +0.70), and that a large fraction (26 of 50, 52%) are enhanced in r-process elements. Among the r-process-enhanced stars, five are strongly enhanced r-II stars (two of which are newly discovered) and 21 are moderately enhanced r-I stars. There are eight stars in our sample that, on the basis of their abundances and kinematics, are possible members of the metal-weak thick-disk population. We also compare our measured abundances to progenitor-enrichment models,and find that the abundance patterns for the majority of our stars can be attributed to a single (rather than multiple) enrichment event.

Next, an abundance measurement of uranium in the metal-poor r-process-enhanced star BD+17 3248 is reported. The heavy-element abundance pattern of 20 elements produced by the r-process from this optical spectrum and an archival ultraviolet spectrum taken with the Hubble Space Telescope is re-analyzed. The U abundance is log_epsilon(U) = -1.45 +- 0.15, the highest yet detected in a metal-poor star, and so far the only detection made in an r-I star. Our analysis finds the actinide content much higher than the values previously reported, leading to the classification of BD+17 3248 as an actinide-boost star. Additionally, it has an unusually high log_epsilon(U/Th) value compared to the other five known stars with detected uranium. We consider the implications of this for r-process nucleosynthesis models and suggest that further studies be done to determine whether this ratio is evidence of nuance within our extant understanding of r-process channels or whether it suggests a new site altogether.

The assembly of the Milky Way’s halo is an open question in the field of Galactic chemodynamical evolution. Kinematic analyses propose that the halo is composed of the remnants of small stellar systems as well as at least one major accretion event; however, such studies are not well equipped to tell us about the chemical nature of such systems. Instead, chemical tagging of halo stars is needed to gain insight into their nucleosynthetic histories. With the advent of the R-Process Alliance (RPA), we have, for the first time, sufficient numbers of r-process-enriched metal-poor stars to perform chemical tagging with neutron-capture element abundances. By analyzing Sr and Eu in these stars, we construct a new paradigm which accounts for the varying contributions of both supernovae (SNe) and neutron star mergers (NSM) to the star-forming gas. We calculate the number of NSM and SNe required to form a given star and build a SNe-based mass function of the early Universe’s stellar systems. Using this information we find that strongly-enriched r-I (+0.70 < [Eu/Fe] < +1.0) and r-II stars ([Eu/Fe] > +1.0) likely form exclusively in small stellar systems, while stars of lower [Eu/Fe] abundance can form in a system of any size.

Finally, The Search for Exoplanets Around Metal-poor Stars with T®ESS (SEAMSTRESS) Survey seeks to answer the question: “When and how did planet formation begin in the Universe?” To achieve this, we have conducted a large-scale search for transits of metal-poor stars in TESS light curves and discovered 47 previously unknown planet candidates around host stars in the metallicity range -2.28 < [Fe/H] < -0.5, eight of which have lower [Fe/H] than any known transiting planet hosts.