Roman ruins at Timgad: The cardo lined by a partially-restored Corinthian colonnade 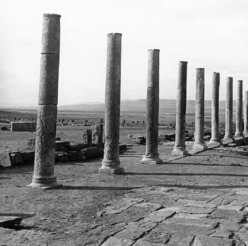 The original Roman grid plan is magnificently visible in the orthogonal design, highlighted by the decumanus maximus (the east-west road) and the cardo (the north-south street) lined by a partially-restored Corinthian colonnade. The cardo does not proceed completely through the town but instead terminates in a forum at the intersection with the decumanus.