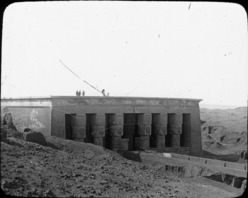 The Greco-Roman Temple of Hathor is the grandest and most richly decorated of its period. The earliest dated inscriptions refer to Ptolemy XII (reigned 80-58 BCE; 55-51 BCE); its outer hypostyle hall was dedicated in November AD 34. It was built of sandstone on the conventional Egyptian plan, but only the inner apartments were completed. A remarkable feature is the use of the emblem of Hathor, the Hathor head, which also forms part of the naos-shaped sistrum, a musical instrument used in her worship. The capitals of the outer hypostyle hall are in the form of naos sistra, their four Hathor heads facing the cardinal points. The head motif is also used throughout the temple interior and on the exterior rear wall.