Pont Saint-Bénezet: View of extant arches and facade of the chapel 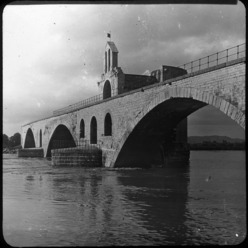 The bridge was finally put out of use by a catastrophic flood in 1668, which swept away much of the structure. It was subsequently abandoned and no more attempts were made to repair it. Since then, its surviving arches have successively collapsed or been demolished, and only four of the initial 22 arches remain intact today. The bridge’s construction was inspired by Saint Bénézet, a local shepherd boy who (according to tradition) was commanded by angels to build a bridge across the river. After his death, he was interred on the bridge itself, in a small chapel (also dedicated to St. Nicholas) standing on one of the bridge’s surviving piers on the Avignon side. Increasing dilapidation of the bridge led to the clergy refusing to preside over services for fear of a total collapse. A new chapel was erected on dry land in the 18th century at the foot of the bridge, on the Avignon side.