Fountain of the Naiads: Overall view of fountain in front of Santa Maria degli Angeli e dei Martiri, built from the frigidarium of the Baths of Diocletian 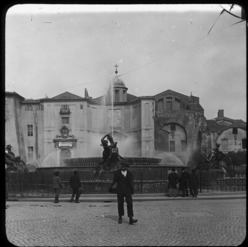 This view dates after 1901 and before 1911 when a central group of figures was added to the fountain.

The fountain in this square was originally the fountain of the Acqua Pia (connected to the Aqua Marcia aqueduct), commissioned on this site by Pope Pius IX in 1870. Completed in 1888, it originally showed four chalk lions designed by Alessandro Guerrieri. These were replaced in 1901 with sculptures of Naiads by Mario Rutelli from Palermo. The naiads represented are the Nymph of the Lakes (recognizable by the swan she holds), the Nymph of the Rivers (stretched out on a monster of the rivers), the Nymph of the Oceans (riding a horse symbolizing of the sea), and the Nymph of the Underground Waters (leaning over a mysterious dragon). Rutulli’s Glauco group was added in the center of the fountain in 1911-1912, symbolizing the dominion of the man over natural force and replacing a previous sculpture.