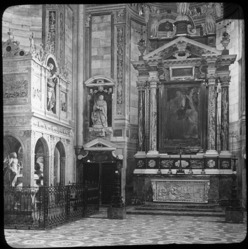 The tomb of Giangaleazzo Visconti (d 1402) was made in the 1490s by Gian Cristoforo, Briosco and others. Its iconography is surprisingly secular, emphasizing the deeds of Giangaleazzo but lacking the New Testament reliefs that characterized contemporary Lombard tombs.

Giangaleazzo Visconti, 1st Duke of Milan, founded the Carthusian monastery, the Certosa, in fulfilment of his wife’s will of 1390. Work progressed slowly after Giangaleazzo’s death in 1402, but Francesco Sforza revitalized the project after becoming Duke of Milan in 1450. Guiniforte Solari guided construction through the period of its most concentrated activity in the second half of the 15th century. The church was consecrated on 3 May 1497, although work continued until the French invasion of Lombardy in 1523, resuming on the façade only in 1550. The façade of the church is famous for its exuberant decorations, typical of Lombard architecture.