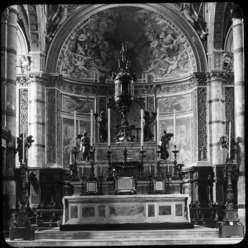 The marble high altar of the presbytery was built in 1532 by Baldassarre Peruzzi. The enormous bronze ciborium is the work of Vecchietta (1467-1472, originally commissioned for the church of the Hospital of Santa Maria della Scala, across the square, and brought to the cathedral in 1506). At the sides of the high altar the uppermost angels are masterpieces by Francesco di Giorgio Martini (1439-1502).

Dedicated from its earliest days as a Roman Catholic Marian church and now to Santa Maria Assunta (Most Holy Mary of Assumption). Vasari and local 16th- and 17th-century historians, who probably drew on more reliable sources, attributed the reconstruction of the cathedral in its present form (except for the choir and transept extension) to Nicola Pisano. The lower part of the façade probably followed Giovanni Pisano’s plan. The cathedral is built of coloured marbles: white from Carrara, green from Prato and pink from Siena. Its interior length (including the 14th-century choir extension) is 89.4 m. It has an aisled, five-bay nave and a hexagonal crossing surmounted by a dome. Plans for an ambitious expansion (the Duomo Nuovo) were abandoned in 1357 after some work had been completed. The inlaid marble mosaic floor is one of the most ornate of its kind in Italy, covering the whole floor of the cathedral. The floor consists of 56 panels in different sizes. The uncovered floor can only be seen for a period of six to ten weeks each year.