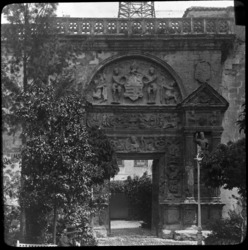 The current palace is situated on the remains of the ancient Roman theater. The first phase was a Mudejar style house, known to exist since at least the fifteenth century. In the 16th century it was enlarged with two courtyards, one dating from 1559 with a reflecting pool. The main facade, facing the Plaza de Jerónimo Páez, was designed by Hernán Ruiz in 1540, and is composed as a triumphal arch, the doorway is flanked by two pairs of columns with heroic figures between them. The palace was renovated to accommodate the museum from 1959-1987.