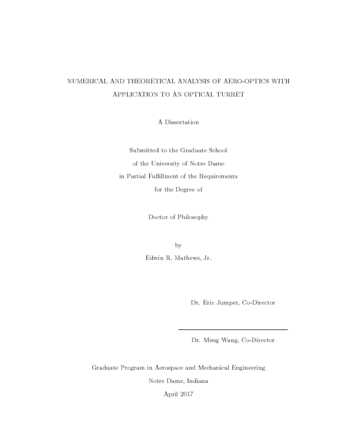 When an optical beam is transmitted through a compressible turbulent flow, it is distorted due to the non-uniform speed of light resulting from density fluctuations. The distortions caused by turbulent airflow surrounding the exit pupil of a beam director, known as aero-optical phenomena, are a major impediment to applications of airborne laser systems. The objectives of this research are to gain a deep understanding of the fluid dynamical causes of aero-optical phenomena and to improve the ability to predict them in practically important flow configurations.

To better understand the spectral properties of aero-optical distortions, a general expression for the phase-distortion spectrum is derived from the ideal-gas law and Gladstone-Dale relation. Using this expression, the relationship among the optical distortion magnitude, turbulence length scales, and aperture size is examined, and resolution requirements for wavefront sensor measurements and numerical simulations are analyzed. Large-eddy simulations (LES) of weakly compressible, temporally evolving shear layers are used to verify theoretical results and to investigate turbulent density fluctuations in relation to pressure and temperature fluctuations. Computational results support theoretical findings and confirm that if the log slope of the one-dimensional density spectrum in the inertial range is -m_rho, the optical phase distortion spectral slope is given by -m_rho + 1. The value of m_rho is shown to be dependent on the ratio of shear-layer free-stream densities and bounded by the spectral slopes of temperature and pressure fluctuations.

One of the most widely used optical transmission platforms is the hemisphere-on-cylinder turret. When employed on an aircraft, the bluff-body shape of the turret creates a complex turbulent flow that can cause severe optical aberrations at even low subsonic Mach numbers. To investigate the turret aero-optics, wall-modeled LES is used to simulate flow over a turret at Mach 0.4 and Reynolds number of 2.3 x 10^6, and the optical distortions are computed using ray tracing. Basic flow and optical statistics show agreement with available experimental data. It is found that the optical distortion over a majority of the turret field-of-regard is solely dependent on the lookback angle. Regions of the field-of-regard where the lookback angle alone is not sufficient to relate viewing angle to optical distortion are those strongly affected by the horn vortices in the turret wake. Wavefront statistics as functions of viewing angle are presented along with the effects of pressure and temperature fluctuations on optical distortions. Topics important to the design of aero-optical mitigation strategies, such as steady lensing, beam jitter and the connection between optical distortions and turret pressure fluctuations, are discussed and quantified.